Launched in 1984 by a PNC predecessor bank in Philadelphia, the 2014 PNC CPI is 118 percent higher than when it all began, while inflation is up 127 percent over the same period. But an even more intriguing fact emerged, according to Jim Dunigan, chief investment officer, PNC Wealth Management.

"While there are exceptions in given years, what's most interesting about the index's history is that since the beginning, year-over-year increases have averaged 2.8 percent, which is exactly the same number as the U.S. inflation index," he said.

The 31st annual survey results were revealed this morning on an enhanced website (www.pncchristmaspriceindex.com) with the theme of bringing the classic carol to a new generation. "The Great Carol Comeback" site features 12 innovative experiences that bring each gift in the song to life in a new and modern way. Content includes a children's book, an animated short film, a sing-a-long and several humorous musical videos that site visitors can share to help the carol's "comeback."

This year, the PNC CPI's increase is close to the government's Consumer Price Index, which stands at 1.7 percent for the past 12 months through October. The government's core index, removing volatile food and energy prices, is up 1.8 percent.

"The recurring theme seems to be that with energy prices and labor costs contained, the overall index increase has been modest despite a few large increases in individual items," Dunigan said.

Eight out of the 12 items in the index remained the same price as last year, but the Six Geese-A-Laying went up a whopping 71.4 percent. The only other increase of significance was the Partridge in a Pear Tree which increased 33.3 percent but is at a still reasonable $20.

As part of its annual tradition, PNC Wealth Management also tabulates the "True Cost of Christmas," which is the total cost of items gifted by a True Love who repeats all of the song's verses. Very thoughtful True Loves must fork over $116,273.06 for all 364 gifts, a much more reasonable increase of 1.4 percent compared with last year's 6.9 percent.

Swans Treading Water
Much like the government's CPI, the PNC CPI also measures a Core Index – up 1.4 percent this year - that excludes the Swans, which tend to be the most volatile in the index. This year, however, the Swans remained steady at $7,000, which is also the same price they cost in 1984, the first year of the index.

Other Key Components Include:

The PNC CPI's sources include retailers, the National Aviary in Pittsburgh and the Philadelphia-based PHILADANCO and the Pennsylvania Ballet Company.

Cyber Prices: The Cost of Convenience

For those True Loves who prefer the convenience of shopping online, PNC Wealth Management calculates the cost of "The Twelve Days of Christmas" gifts purchased on the Internet.

This year, the trends identified in the traditional index are not repeated in the Internet version. True Loves will pay a grand total of $42,959.07 to buy the items online, a surprising increase of eight percent from last year, $15,285 more than buying "in person."

For a historical look at PNC's index, the updated website can be viewed at www.pncchristmaspriceindex.com.

Each year, educators across the country use the PNC Christmas Price Index to teach economic trends to middle and high school students. With that in mind, this year's site includes interactive activities, annual results and PNC CPI trends in a Flash presentation, MP3 downloads and much more.

Educators who visit the site will also find lesson plans on the Christmas Price Index from The Stock Market Game™ (SMG), a program of the Securities Industry and Financial Markets Association Foundation for Investor Education (www.sifma.org/education). The enhanced activities are specially designed to help students identify economic trends and to project their impact on this year's Index, giving them the opportunity to make predictions and check their success against actual results. SMG is America's premier educational stock market simulation. Available in all 50 states for grades 4-12, the SMG program teaches children core academic and investment skills. 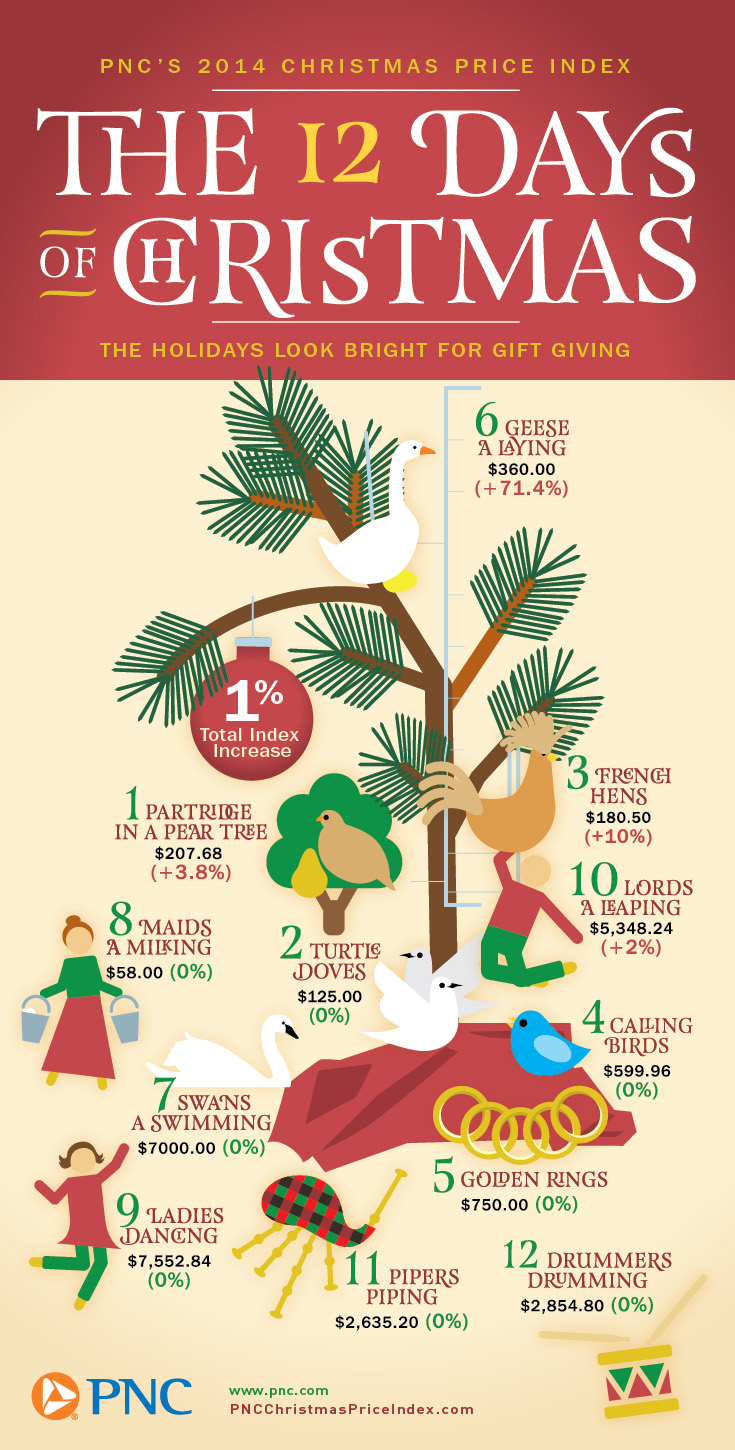