Small And Mid-Size Business Owners Feel A Slight Chill In The Air
-- PNC Survey shows optimism about the economy fell slightly since spring, but remains well above fall 2017; pessimism remains at historic low (4 percent).
-- Expectations for increased profits are the second-highest on record (59 percent), only outpaced in spring 2018 (64 percent).
-- As labor market tightens, eight in 10 (82 percent) report already taking actions to retain or attract employees, including bonuses and flexible work arrangements.
-- Outlook on proposed tariffs indicates sharp divides: four out of 10 support; three out of 10 oppose based upon what's best for their own business. 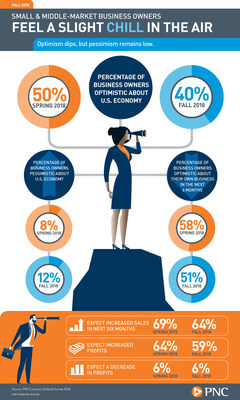 PITTSBURGH, Oct. 2, 2018 /PRNewswire/ -- Historic optimism about the national economy from the spring (50 percent) chilled slightly this fall (40 percent), but remains well above fall 2017 (29 percent), according to the PNC Economic Outlook, a semiannual telephone survey of small and middle-market business owners and executives. Four out of 10 business leaders described their outlook for the national economy as optimistic, the second-highest rating in the 15-year survey.

"Optimism for small and mid-sized business owners about the national economy, their local economies, and their own companies remains near record highs, although it has slipped slightly since the spring, according to our fall 2018 survey," said Gus Faucher, chief economist of The PNC Financial Services Group, Inc. "Hiring expectations also are near a record high, as we continue to witness the second-longest economic expansion in U.S. history."

Price Check: The number of business leaders forecasting rising prices in the next six months gained momentum. More than half (53 percent vs. 41 percent in spring 2018) anticipate suppliers charging more; 45  percent (vs. 29 percent in spring 2018) plan to charge their customers more. Of those planning to raise the prices they charge customers, (45 percent) anticipate a one- to two-percent hike, while 25 percent anticipate a 5 percent or more increase. Increasing business, favorable market conditions and rising labor costs are among the key drivers of higher pricing. Only 3 percent of businesses anticipate lowering prices.

Waging Workers: Small and mid-size business leaders expect wages and hiring to remain near the record highs reported in spring 2018. 46 percent expect to increase wages (vs. 49 percent in spring 2018), while the number planning to decrease workers' wages remains at a survey low of 2 percent.

Bonus Round: With the labor market continuing to tighten, eight in 10 (82 percent) business leaders across all industry sectors say they already have taken one or more actions to retain existing or to attract new employees: increasing wages/salaries (44 percent), offering or increasing bonuses (24 percent), and boosting benefits (24 percent). Over one in four (28 percent) have allowed more flexible work arrangements and one in 10 have relaxed hiring standards.

The Three Faces of Tariffs: Four out of 10 (41 percent) respondents report currently selling items or services to or buying items or services from other countries to some extent. The percentages are significantly higher for manufacturers (59 percent) and wholesalers/retailers (47 percent). However, only 8 percent of all respondents characterize the volume of that trade as "large." When asked to choose sides on increasing U.S. tariffs on other countries' goods based upon what's best for their own business, 41 percent are in support (33 percent in spring 2017) and 31 percent are opposed (32 percent in spring 2017); more than a quarter of business leaders (27 percent) are uncertain.

As a result, four out of 10 anticipate paying higher prices to suppliers. Three out of 10 business leaders (31 percent) expect to increase the prices they charge their customers should the United States impose increased tariffs on other countries' goods, but nearly half (47 percent) expect no impact. Nearly half of business leaders (48 percent) do not expect any impact on company sales, with 18 percent anticipating increased sales. Only 8 percent forecast decreased sales as a result of increased U.S. tariffs on goods from other countries.

A digital package containing national and regional survey results is available at http://pnc.mediaroom.com/digital-packages.

The PNC Financial Services Group, Inc. (NYSE: PNC) is one of the largest diversified financial services institutions in the United States, organized around its customers and communities for strong relationships and local delivery of retail and business banking including a full range of lending products; specialized services for corporations and government entities, including corporate banking, real estate finance and asset-based lending; wealth management and asset management. For information about PNC, visit www.pnc.com.

Methodology
The PNC Economic Outlook survey was conducted by telephone from 7/9/2018 to 9/13/2018, among small and mid-sized businesses. 503 interviews were conducted nationally. Sampling error for the nationwide results is +/- 4.4% at the 95% confidence level. The survey was conducted by Artemis Strategy Group (www.ArtemisSG.com), a communications strategy research firm specializing in brand positioning and policy issues. The firm, headquartered in Washington D.C., provides communications research and consulting to a range of public and private sector clients.

DISCLAIMER: This report was prepared for general information purposes only and is not intended as specific advice or recommendations. Any reliance upon this information is solely and exclusively at your own risk. NOTE: The sum of percentages may not add to the total due to rounding.