Members Of Sandwich Generation Lack Emergency Savings, Are Ill-Prepared For Retirement Costs
- PNC survey queried Americans who could find themselves caught between financially supporting children and elderly families, commonly known as the sandwich generation
- Nearly four in 10 members of the sandwich generation do not have an emergency fund
- Most expect to have at least one family-related financial responsibility within 10 years, and yet have not planned for it 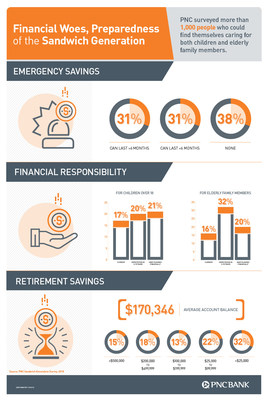 PITTSBURGH, Feb. 26, 2019 /PRNewswire/ -- Despite actively saving and preparing for retirement, members of the sandwich generation report they have been unable to build robust emergency savings and retirement account balances primarily due to the strain of financially supporting other family members.

Nearly four in 10 (38 percent) indicate they do not have an emergency savings fund, and a third have less than $25,000 saved for retirement, according to The PNC Financial Services Group's recent survey of members of the sandwich generation.

The demographic is acutely aware of its financial shortcomings, but instead of that knowledge spurring action, the stress of the responsibility is overwhelming to the point of creating an unpreparedness for the future.

"Our survey revealed that many members (29 percent) of the sandwich generation would prefer to bury their heads in the sand and avoid thinking about their finances," said Rich Ramassini, director of Strategy and Sales Performance for PNC Investments. "The reality is that the only way to improve your financial situation is to be honest with yourself and commit to making the necessary changes required to prepare for the future."

More than half of respondents have $100,000 or less saved for retirement, with 32 percent reporting an account balance of less than $25,000. The average retirement account balance among the sandwich generation surveyed is $170,346.

"We can see that the sandwich generation is struggling to save for their own needs. When you add in the demands associated with financially supporting children and/or elderly family members now or in the future, it paints a very grim picture for this demographic's future unless they take immediate action," Ramassini said.

Twenty-five percent support children under the age of 18, 17 percent support adult children over the age of 18 and 16 percent are currently caring for parents or elderly family members, though almost double (32 percent), expect to care for an elderly family member within the next five to 10 years. However, only one in five respondents have actually planned for those expenses, however.

"Because Americans are living longer, their expenses in retirement will only increase. Whether it's day-to-day expenses, the cost of healthcare or other needs, retirement is expensive," Ramassini said. "Unfortunately, many retirees will be relying on their adult children to supplement their income in retirement. Yet we see that Americans are largely unprepared to assume those expenses, and most of them don't expect to financially support family members. Unfortunately, that's wishful thinking."

The survey indicated that respondents who support parents or elderly family members are more stressed than those who are supporting children under age 18, though respondents with multi-generational financial responsibilities report being twice as overwhelmed as those who do not have financial responsibilities for children or elderly family members.

The one thing that increases feelings of financial security. The survey asked respondents to report whether or not they had a financial plan (written or informal) and/or a financial advisor. Very few (16 percent) have a formal financial plan, though 51 percent indicate they have an informal plan.

The results found a correlation between having a financial plan and stress levels.

Sixty-one percent of respondents without a plan reported feeling stressed about their finances, compared to 24 percent of those with a written plan who indicated they felt the same.

Similarly, 44 percent who do not have any type of financial plan say they would rather not think about their financial responsibilities. Less than a fifth (17 percent) who have a written plan feel the same way.

"A financial plan will not only help you document what you need to do in order to achieve your goals, but now we also know that it can influence people's emotions and confidence," Ramassini said. "The best strategy to feel more financially prepared and have a greater chance of reaching your goals is to work with a financial planner who can create a personalized plan that incorporates your unique situation, objectives and habits."

PNC Investments LLC is a member of The PNC Financial Services Group, Inc. (NYSE: PNC). PNC is one of the largest diversified financial services institutions in the United States, organized around its customers and communities for strong relationships and local delivery of retail and business banking including a full range of lending products; specialized services for corporations and government entities, including corporate banking, real estate finance and asset-based lending; wealth management and asset management. For information about PNC, visit www.pnc.com.

Methodology
The Sandwich Generation Survey was commissioned by PNC to identify attitudes and behaviors of millennials. The study was conducted online between Aug. 1-13, 2018 and sourced from an online panel of consumers. Participants were screened to be between 36-60 and reported they were actively involved in household decisions regarding the selection of financial investment, brokerage or mutual fund companies. Survey results are balanced in accordance of the US Census population distribution for age and gender to ensure representativeness. No weighting was required. The survey was designed by Chadwick Martin Bailey, a market research firm specializing in custom research.

This report has been prepared for general informational purposes only and is not intended as specific advice or recommendations. Information has been gathered from third party sources and has not been independently verified or accepted by The PNC Financial Services Group, Inc. PNC makes no representations or warranties as to the accuracy or completeness of the information, assumptions, analyses or conclusions presented in the report. PNC cannot be held responsible for any errors or misrepresentations contained in the report or in the information gathered from third party sources. Any reliance upon the information provided in the report is solely and exclusively at your own risk.