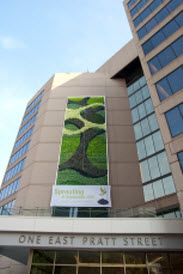 On Sept. 18, 2007, PNC announced the successful conversion of 231 Mercantile Bankshares branches and 500,000 customers. Since then, the bank has made a considerable impact in terms of growth. This includes expansion with branches inside 27 Giant Food stores and ATMs in six Harris Teeter stores, as well as five newly constructed branches across the state. Major clients include Under Armour, Towson University and the University of Maryland, Baltimore County. PNC continues to hire across all businesses, including substantial growth of its wealth management division with recent expansion on the Eastern Shore and additional offices planned in Annapolis and Towson in 2013.

Since 2007, PNC also has invested more than $18 million in Greater Maryland through grants and support to nonprofit organizations. As part of Grow Up Great, PNC’s $350 million, multiyear initiative to help prepare children for success in school and life, local PNC employees have volunteered nearly 19,000 hours at preschool programs. As a result, employees have earned more than $89,000 in grants for the preschool programs they support. Major grant recipients include the Y of Central Maryland and the Maryland Science Center.

In 2008, PNC launched its Community Development Banking efforts to boost the quality of life in low-and-moderate income neighborhoods through affordable housing, economic revitalization and customized financial solutions. In addition to grants to nonprofit organizations, PNC employees presented more than 200 financial education classes to teach budgeting, savings and other aspects of smart money management.